Léger: Modern Art and the Metropolis

It is a great show, which is not about great painting but about a great time,  an optimistic time, when the development of machines wasn’t seen as a danger but as an answer for the twentieth-century society. It is about an energetic time of industrialization and urbanization.

The exhibition shows the cocktail of interests among artists of different areas and the works by Léger actually is about only one third of the display. 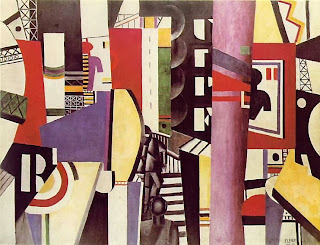 
Joseph Fernand Henri Léger (1881-1955) was a great French modernist. He was a  painter, sculptor, master of decorative art and filmmaker (an Estern Eropian would add to the list a member of the Communist party as well).

In this exhibition, which is on from October 14, 2013 through January 5, 2014 at the Philadelphia Museum of Art, an important part of Léger’s paintings on the theme of the city is being presented, together with architectural models, stage designs, print and advertising posts not only by the artist but also by his contemporaries. You can find works by Severini, Delaunay, Turk-Delaunay, Lissitzky, Mondrian, Man Ray, Kupka and Archipenko. An intriguing part of the show are videos of relatively short movies made by Léger and his friends, such as Dudley Murphy, Marcel Duchamp, Francis Picabia and others.

Modern Art and the Metropolis concentrates on the decade after 1918, when Léger, returning to Paris after World War I, was very fascinated by the development of the city. A changing metropolis demanded a new art. Léger decided to be part of that newness. And his work he simply called “a new way of seeing.”


There is an interesting article on display by the artist written in Russian, where he says: “One who portrays is right, one who copies is lying.”

To me paintings by Léger look very much like collages made from colored metal. There is no free brushstroke, but highly designed geometrical compositions with no air unlike in cubistic works by Picasso and Braque. All forms are super closed and determined. Nowadays no one would paint like that, but simply use Photoshop or similar programs.

One thing for sure, Léger used a lot of colors and he had an enormous impact on “color in the world.” During Second World War he was in the USA and had a strong influence on numerous young American artists, including Stuart Davis and Roy Lichtenstein.

Posted by maryna bilak at 8:00 PM No comments:

Some of the quotes of great artists

"Painting is stronger than I am; it makes me do what it wants. I'm the sketchbook."

"Flesh was the reason why oil painting was invented."

"I believe that nothing can be more abstract, more unreal, than what we actually see. We know that all we can see of the objective world, as human beings, never really exists as we see and understand."

Maryna Bilak#www.marynabilak.com.ua
Posted by maryna bilak at 12:16 AM No comments: