The Rural We: Maryna Bilak

The Rural We: Maryna Bilak
Jan 28, 2019 | By: The Rural We
https://www.ruralintelligence.com/community/the-rural-we-maryna-bilak

Artist Maryna Bilak’s Winter Star sculpture has been a highlight of Hudson, New York’s Winter Walk for the past two years. Now, you can see more of her work in a new solo show, “Care,” opening at Hudson Hall on Saturday, Feb. 2. Through paintings, charcoal drawings, fresco and sculpture, Bilak documents what it means to be a caretaker for someone with Alzheimer’s and delves into the varied roles each person involved plays, including the patient herself. Born in the Carpathian Mountains in West Ukraine, Bilak studied in Budapest and Prague before receiving her second MFA from the New York Studio School. She lives in Hudson with her husband Maurice Haughton, daughter Irina and her mother-in-law Dorothy. 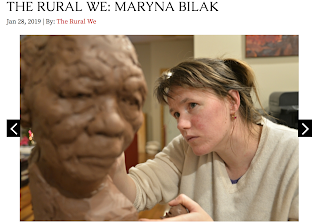 I came to America in 2012 to study at the New York Studio School in Manhattan. It’s my second MFA, but the education was so different from my previous studies. It really changed me as an artist. I learned not how to make art but to ask myself why I do what I do. As I was approaching graduation, in 2014, I had a show in New York and one of the guests at the show was Maurice. He’s the reason I stayed in America. We got married and moved to Hudson, and now I have my art studio right next to the house, so I can work any time I want. Most of the art for this exhibit was made after my daughter was born; it was a very intense time. My daughter is the direct connection to my mother-in-law, who suffers from Alzheimer’s.

We moved to Hudson in 2015, but the caregiving started five years ago, when we were first dating. Most couples go through this after 20 or 30 years of marriage, but we were still in the romantic period. I became the main caregiver for Dorothy when she was still mobile, but I did all the cooking, I showered her, all these kinds of intimate things. I was working in the apartment and I would sculpt or paint on the terrace and she would watch me. When someone has Alzheimer’s, they are losing their ability to smile, but sometimes she would smile and laugh and we really had fun. I was so happy to see that she was happy. That was the beginning of our relationship.

So many people say it’s beautiful and nice to be able to care for someone like this, but it’s extremely challenging and it’s more than artwork can express. It’s something that people don’t like to talk about. There’s a level of resentment. Many people forget themselves and dedicate themselves to the person who is sick. We talked to professionals on how to deal with it, because we felt like we were disappearing.

Having Dorothy progressing with the disease put some challenges on our relationship. Very often I would go to my studio for a break; I would escape there. I tried to convince myself that it was my happy place and my rescue, but all my thoughts were still focused on the everyday experience of sharing space with someone who is mentally and physically disabled. When the denial passed, I was standing in my studio and I starting seeing some patterns in my work. I started noticing it had those connections, so I decided to embrace my situation. My mother-in-law became my model and a great inspiration. She likes the attention and I love to make art. Her features are perfect for sculpture and painting. When she was posing for portraits, she was normal, but as soon as I was finished, she would go into another world that we don’t understand.

The fact that I’m an artist, and it was the only thing I never gave up, really saved me and my marriage. The art is about Dorothy, but also about me and my husband. The part of the exhibit called “Monologues” is writing, and it’s a representation of thoughts from different perspectives. There are 12 characters and I tried to figure out how each feels. Dorothy is shown as three persons: a mother-in-law, an older lady and an Alzheimer’s s patient. Maurice is a son, a husband and a man, and I’m a daughter-in-law, a wife and an artist. It’s about how we learn how to live with each other and go through the struggles.

This is only a tiny expression of my experience, and the variety of materials speak to all the varieties of situation that come with care. “Caring Hands” is a special work because it’s a collaboration. I invited everyone who helped us with Dorothy, who provided either physical or emotional support. I mixed plaster and they each held it in their hands until it set, about eight minutes. It’s a series of hands, installed on one wall, framed but with no names, so it’s anonymous. It’s very symbolic in that it shows how many people it takes to care for someone.

Another part of the exhibit is a series of plaster abstract sculptures. Dorothy would sometimes not recognize some of her clothing and would want to get rid of it. I collected the cloth and used it as material. I sewed it together like it was a body and poured liquid plaster over it. There was very little I could do to control how it set, which is just like being a caregiver.

The exhibit shows care but also how I help myself; there were tough moments and I felt very often weak and desperate and sorry for myself, which I hate. The artwork started not on a conscious level at first, but I approached my husband about the show and he was a little apprehensive. But the artwork was happening already, and then we started learning that there are so many families having to deal with this. Three people just on our block have someone who has this disease. He’s happy now because he thinks it helps remove the stigma. I hope with my show, it can bring awareness, and people can educate themselves. If Maurice and I knew more about it at the beginning, it wouldn’t have been as hard. Hopefully people can avoid the mistakes we made. And I encourage people to have something for themselves, in my case it was art-making, because it really, really saved me.

Posted by maryna bilak at 7:17 PM No comments: 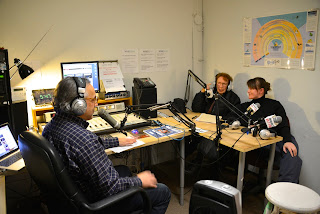 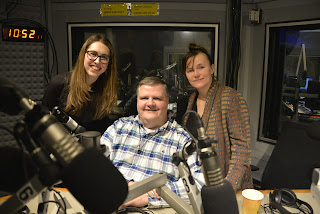 Posted by maryna bilak at 6:37 PM No comments: